Failure Of The ‘Don’t Be Evil’ Concept: Part I

Posted on June 3, 2011 by Adaptive Curmudgeon

Lightning struck very close to Castle Curmudgeon.  We didn’t take a direct hit but it rated a Sphincter Level Seven on my patented scale of terror.  Nothing was damaged but the cordless phone base was dead.  Both the DSL filter (a cheap little thing) and the handset base (not so cheap) were toast.  The two handsets and one charge-only base were fine.  The dog may need therapy. 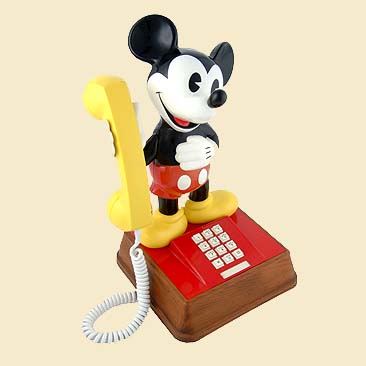 When the power is down and the zombie hordes are coming you'll wish you had a reliable "corded" phone like Mickey.

Just for the record my “Bert Gummer red phone” (an old fashioned “wired to the wall” phone) worked as flawlessly as ever.  I wired that bastard up and bolted it to the wall  years ago.  Non-cordless phones work in power outages and your kid can’t wander off and lose the damn thing.  It has served well many times.  I use it periodically but most modern humans have apparently lost the ability to talk on a phone that has a cord.  Plus, the base was my answering machine which is a key component in my “don’t answer unless I feel like it” telephone interaction plan.  I needed to replace the damaged system pronto. 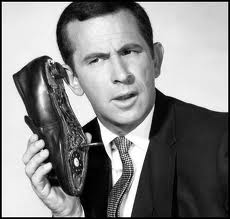 It's important to have a phone you won't misplace.

The lightning fried phone was “expandable to add more handsets” and it was six months old.  It was made by a common manufacture of electronics I will hereafter refer to as Sonofabitch Incorporated.  I expected to buy a new base (with one or two handsets) and link it to my existing two handsets (which are perfectly functional but doomed without a base…like Ron Paul).  Of course the exact same phone isn’t available.  Sonofabitch have “upgraded” their phones.  I bought Sonofabitch’s most similar model (which was pretty much all they had).  It was “expandable” just like the old one.

You know where this is going.  The new base and handsets look identical to the old base and handsets.  Buttons in the same color, same arrangement, same everything.  But the handset base has been changed just the tiniest bit; about 1/32″ wider and 1/16″  shallower.  Exactly the smallest change that would make the old handsets incompatible with the new base.  No sweat, the old charger works.  Just fire ’em up and go.

What’s this?  I need to “register” the two old handsets to the new base?  Fine.  What’s this?  It can only be done using the old base…which is dead.  I believe I’ve been had.

What will the Curmudgeon do?  Will he go on a three state killing spree?  Curl up in a corner and weep?  Apply for Obamabucks stimulus money to recoup his lightning loss?  Can he find and hire the A-Team to get his revenge?   Tune in to Part II tomorrow (or whenever I get around to posting it).

I will neither confirm nor deny that I actually exist.
View all posts by Adaptive Curmudgeon →
This entry was posted in Curmudgeonly Gems of Insight, Libertarian Outpost, Technology of Indignity. Bookmark the permalink.

1 Response to Failure Of The ‘Don’t Be Evil’ Concept: Part I