Brexit Is Not A Harbinger Of Doom

Posted on July 6, 2016 by Adaptive Curmudgeon 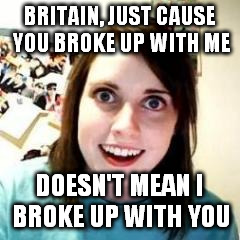 Long ago I was in a tavern in Europe witnessing an interesting discussion. I manned my seat, overindulged in wine, and listened. Folks told me how awesome their future European Utopia was going to be. They cheered for it like a soccer match.

I’m skeptical of Utopia. Utopia sucks. I don’t want to live in Utopia. I prefer to live in Reality.

My European friends were enthralled with the EU. The EU was going to fix how traveling in Europe was a pain in the ass. They’d just spent hours telling me how awesome Eurorail was! Their general feeling was that American’s insistence on driving overpowered wheeled dreadnaughts was silly when you could sit in a train seat. But now travel was a pain in the ass? How’d that happen?

Another complaint was the need to exchange currency when traveling. I liked their colorful money and big coins. American greenbacks look stodgy and our coins are worth jack shit. More importantly it seemed to me that a slew of moving currencies would efficiently measure out their relative value.

They said I was missing the point. With the EU everything was going to be fixed! I didn’t understand quite what was broke but nodded politely.

I make a point of not having an opinion about how other people should run their countries but I did listen carefully. What I heard seemed to indicate the absence of a purpose more than explain the purpose itself.

My passport was in my pocket (where I always keep it when I’m overseas). I bought another round of wine with a Visa card. Money came out of an American account (measured in dollars) and made a European purchase measured in a different currency. Without leaving my seat I’d overcome the two biggest travails leading to the EU?

I asked a few questions. “Do you really want to merge your country with people against whom you’ve fought wars?” (Everyone in Europe has fought everyone else. Each town has local history about how “Fred the Awesome” slew the shit out of the dirtbag invaders from the next town over. This is documented in “the glorious sagas of 1247”. The next town over will have a competing story about “Ralf the Hearty” who ended Fred’s reign of terror in 1289. They’ll have a commemorative statue. It goes forever.)

Also was there no value in everyone’s cool stamps, traditions, local cuisine, culture, and markets? Everyone was simultaneously proud of their country’s culture and stampeding to shitcan it.

Was this how the Romans did it? I thought it was “get with the program or we’ll kill you.” Maybe it was “check out this excellent road” followed by cheers for the road?

Also why would anyone let the French make rule about bananas? (Bananas were a big thing in EU news. Imagine news reports about NATO that revolve around turnips.)

The currency thing seemed mere logistics. Was it so hard to swap Deutsche Marks for Pesetas? Does not algebra and a calculator provide the solution? “Math is hard so I’m going to subsume my country’s economy.” Really?

I was assured that yes it was going to be super cool for everyone to join together and calculating currency was absolutely the definition of pure hell. It dawned on me that there must be some other justification and I wasn’t going to hear it.

Before giving up and agreeing that the EU was going to pay the rent and cure cancer I asked one more question. “Is it wise to chain all the swimmers together and lose your diversity?” I related that in America if one state goes broke the rest of us get hosed. It’s an inherent weakness of our system.

Everyone listened politely to the clueless American but they had a simple answer; “that will never happen”. I was speechless. “Really? There won’t ever be a member nation that does something stupid? Nobody’s going to build something ridiculous, invest in tulips, or flip out and invade Russia? People make bad decisions and go broke all the time don’t they?” Everyone was chill. “‘Aint gonna’ happen.” My questions were dumb because the EU was going to be awesome. End of story.

Of course it all played out in due time. Some nations tanked financially. They became a burden on the other swimmers to whom they were chained. It’s much like my milder examples in America. California is freebasing on high speed rail and Puerto Rico is broke. Their choices burden the taxpayers of Iowa and Maine.

Meanwhile the EU is its own straightjacket. if you want a banana in Spain you’d better clear it with a team of examiners in Brussels who regulate them in deference to an inexplicable French obsession. (I never understood the banana thing.)

Ironically my example of US and Canadian cooperation is gone. People like me need passports at our mutual border (the same at Mexico) but a zillion illegals have an exemption. They tromp right through Texas while I dutifully hand over a passport on a fishing trip to British Columbia. For America that debate will never end. Texas and Arizona scream for mercy over immigration (legal or otherwise). Maine and South Dakota are a thousand miles away and ignore them. The EU plays the same game. Substitute Greece and Germany for Arizona and Wisconsin and you’ve got the same shit, different continent.

Years after that discussion in the tavern Europe is freaking out that Britain choose to incrementally separate itself from the Borg. As if it’s Britain’s responsibility to maintain the Borg? If the EU was really awesome wouldn’t “adios fucker” be a fine response? Instead it’s “we’re super hot and you’ll never be happy without us”. Sounds like a psycho ex-girlfriend.

I never fathomed the true reason behind everyone’s enthusiasm for the EU but it’s a moot point now. Utopia was promised and something else arrived and everyone experiences the something else. Flaws I noticed three weeks into my residence in Europe were questions nobody was willing to consider. Thus they weren’t addressed.

As for me, EU’s development validated my skepticism over any endeavor where advocates won’t even consider questions. It works regardless of the subject; global warming, gun control, buying a used car, where did the last donut go? If asking questions is verboten you’re dealing with a sham.