Posted on December 14, 2015 by Adaptive Curmudgeon

Six weeks ago I bought a Raspberry Pi. I had A PLAN to DO STUFF. I was going to shoehorn this little hunk of technology into something that’s almost but not quite a laptop. I wanted to make my personalized Curmudgeonly version of this guy’s “Ambition Box“. 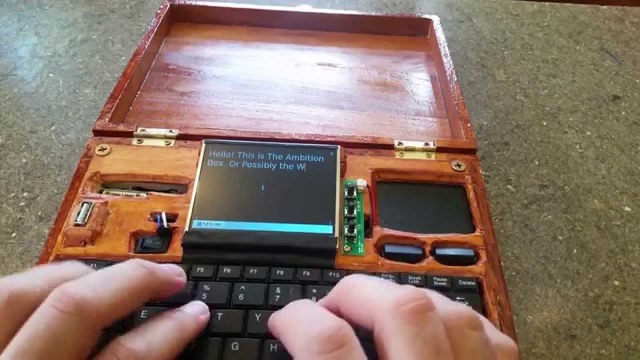 This guy should take a bow. His concoction just oozes uncool and impractical; like me. So when I got my Raspberry Pi I eagerly tested it enough to know it worked. Took a deep breath and…

I went hunting. ‘Cause that’s how I roll.

While I was hunting I pondered my next move. (Hunting is about thinking is it not?) I have no time to tinker with a bespoke wood box and as soon as I reach for a soldering iron mayhem ensues. Yet I wanted the critter up and running by Christmas. Long term irrational goals would have to wait. I needed a dirt simple way to get the idea off the ground now.

Luckily someone else had figured it out long ago. I followed the Internet’s trail of breadcrumbs to the simplest solution. I purchased some crap on the internet (details follow) and with virtually no effort whatsoever created a laptop out of cheap components. Yay me!

I don’t have time to describe it all right now. (The duck is plotting against me and I must attend to his shenanigans.) However I’ll start now with a parts list (which is all you really need).

It’s not rocket surgery to jam cables in various gadgetry so even without “instructions” you can do it yourself. I did. I highly recommend that you do too. The world is awash in iSlabs… we’ve got to take a stand!

Step One: The “Brain”: Don’t overthink it. The Raspberry Pi is pretty much good to go and if you start surfing components and options you’ll go down the rabbit hole. (Which can be a fun trip.) I bought a CanaKit Raspberry Pi 2 Complete Starter Kit

and couldn’t be happier. The kit costs a bit more than the board alone but it comes with the power supply, case, wifi dongle, microSD, an HDMI cable, heat sinks, and instructions which are idiot proof. Also the microSD has the OS & software pre-loaded. (Did I mention it was idiot proof?) You won’t save much money buying the parts independently and when it arrives as a kit it’s nigh on impossible to be too dumb to assemble it. Trust me, if it could be messed up, I’d have done it. 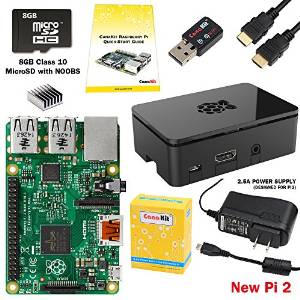 It’s not rocket science to buy the parts but the kit is just as cheap.

Step Two: Get Thee A “Lapdock”:

A laptop is really a series of functions; a screen, a keyboard, and a power supply. Put all three in the general vicinity of a Raspberry Pi and you’ve got an improvised laptop. There are a million way to do it. I chose the simplest. As in, out of the box and running in five minutes. It’s not the cheapest method but it’s probably on the low end of cost and it doesn’t look half bad.

What I bought is a keyboard/screen/battery that lacks a brain. I present to you the AT&T Laptop Dock for Motorola ATRIX 4G. This thing is a great idea. It turns a smart phone into a laptop. It almost makes me want a smart phone (almost but not quite). So of course marketing shit all over the simple idea. They overpriced the living hell out of it. (Marketers are walking black holes.) Everyone and their dog was appalled at the price, stuffed their smartphone in their pocket, and bought a parallel duplicate dedicated device for “computing”. (Which usually means “surfing Facebook”.) As far as I can tell the market failure of the “lapdock” is all about being too damn expensive and not that it’s a crappy design. At any rate their stupidity is our gain. What once cost several hundred due to marketing stupidity is now an incredibly good buy at $80. 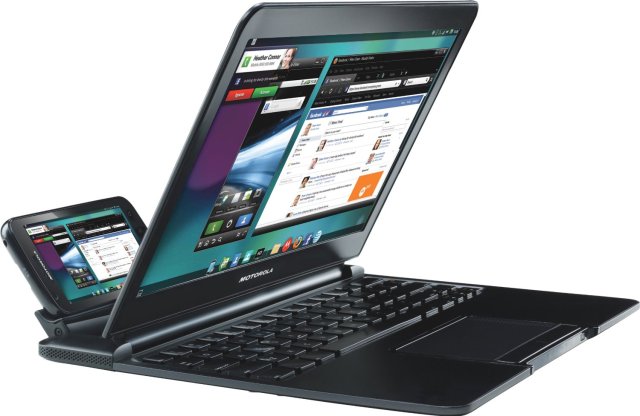 All it needs to attain perfection is to be pierced with some Phillips head screws and jammed in a cigar box. Maybe I’d add some duct tape highlights? (Photo is linked to the product.)

Step Three: $13 In Fiddly Bits: The “lapdock” was meant to talk to its smartphone via USB and HDMI. Like everything on a smartphone they’re a bit weird. You need two specific sex change adapter cords. These are cheap but you aren’t likely to find them at your local store (especially if you live in the hinterlands like me). These are what I ordered: 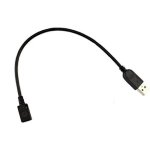 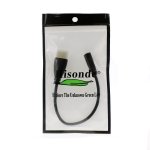 Step Four: There Is No Step Four:

You’re done. Seriously I mean it. Your soldering iron will get no exercise this trip. Plug the cables into the lapdock (they’re a tight fit) and into your Pi. Boot up the Pi and the Lapdock will do its thing without a hint of confusion. You are now the proud owner of an improvised laptop that runs Linux, does whatever you want, and is more or less DIY. It’s the polar opposite of a $400 iSlab’s gleaming conformity. When you fire it up at Starbucks you’ll feel the earth move when a thousand ironic hipsters weep all over their advanced English degrees. The Internet ‘aint all Steve Jobs and one size fits all solutions; it’s got room for the likes of me too!

4 Responses to Raspberry Pi: IT WORKED!