Raspberry PI: I’m Always One Step Behind The Cool Kids

Posted on October 23, 2015 by Adaptive Curmudgeon

I have a love / hate relationship with computers. They’re awesome (even essential) for certain purposes (I’m not blogging with a quill pen) but I spend a lot of time with the feeling that the NSA and marketers are crawling up my ass.

Computers are tools. I own them, not the other way around. (And don’t get me started about “smart” phones!) I want electronics to do precisely what I want and not a goddamn thing more. 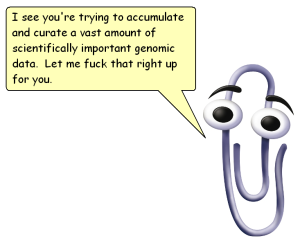 The fact that Clippy existed even one day in any universe that included me is a complete explanation as to why I want to make my own computer.

So what’s a Curmudgeon to do? Be Adaptive of course! So last week I rolled the dice on a Raspberry Pi 2.

Raspberry Pi 2 Model B. A fine stocking stuffer for the mad scientist in your life.

I meant to test it, maybe see if it would somehow set it on fire (like other “experiments”), and then report my findings. Would it be too weak to use? Was it a silly toy? Or would it become sentient and start beating up the other computers in the room?

I haven’t done much with it yet but I’m happy to report that Moore’s Law has worked its magic. The cheap little box (about the size of a cigarette case) is plenty sufficient for many purposes.

So the Raspberry Pi 2 seems pretty cool and (aside from the cutsey name) poses no major flaws. There’s more but I’m too busy to write it all up just now. While I dithered in reporting the Silicon Graybeard stole my thunder by mentioning them first. (What can I say, I’m always late to the party.) You should hear his reasoned discussion; which is likely more fully informed than me just noodling around with it for a few days.

In the meantime, here are some factoids of merit.

First: Just give up and buy the kit. You can buy all the parts separately and this will save you approximately zero dollars. Here’s how I know this. I priced out the following components:

Then I bought it all in one kit because it was damn near the same price and I didn’t have to fret about whether some doohickey wasn’t compatible with the Pi’s flux capacitor. I can’t remember the price difference but shipping alone would kill any minimal savings. If you’re really into this sort of crap go ahead and buy like it’s a Chinese menu. If you’re busy or bored just buy say “screw it” and buy a CanaKit Raspberry Pi 2 Complete Starter Kit

. The kit costs about $30 more than the board alone and includes the power supply, case, wifi dongle, microSD (preloaded software!), an HDMI cable, heat sinks, and instructions which are idiot proof.

It’s not rocket science to buy the parts but the kit is just as cheap.

Second: You cannot possibly be too dumb to assemble the kit. Trust me! The case that comes with the CanaKit is so simple that a chimp with brain damage can do it. (You won’t even need a screwdriver.) I assembled it in 5 minutes and then spent the next 20 minutes wondering what I’d missed because nothing should be that easy.

Third: You can get a Raspberry Pi case that’s amazingly epic and there are hundreds to choose from. The CanaKit case is actually pretty cool (it’s nicer in person than it looks on the photo) but there are cases out there that are art. (Gone are the days of Altoids tins… unless that’s what you prefer in which case go for it.) I burned way too long just window shopping at groovy cases. I will upgrade my case sometime but that day is not today. (I want to see if I’m going to change the size/specs on the Pi when I install some “needful shit”. Also “needful shit” is absolutely a technical term. What makes you ask?) For style alone I narrowed it down to either the awesomely named and totally outlandish Pi Borg Plus ($20) or a considerably less aggressive birch/plywood enclosure

Is that not the coolest thing you’ve ever seen? (It’s $20 and if it’s sold out before I get around to buying one I’m going to be pissed!) 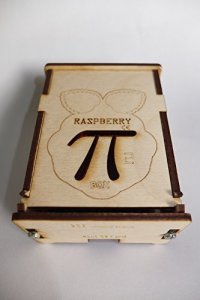 A little too cutsey for me but it’s made of birch and has a removable top. (Also it’s sold out.)

Fourth: Building your own NOOBS microSD is probably not all that hard and NOOBS will solve everything for you during setup. I probably didn’t need to buy it pre-made. The NOOBS (great name!) software will install the Raspibian (Linux) OS and various other stuff with almost no effort. That said, I didn’t have a spare microSD and simply cramming the pre-made mircoSD in the Raspberry Pi had me rolling in twenty minutes (counting time for uploads).

Fifth: The Wifi Antenna that came “free” with the CanaKit is all you need. I bought a Wifi USB Plug – With Big Ass Antenna

($14). I use it where WiFi is weak. It’s slightly better thant the “free” one. (‘Cause the best antenna is a big assed one, duh! Science isn’t that hard.) However it’s overkill for most situations and the CanaKit WiFi dongle looks nicer in the case. (Incidentally if you’ve got a plug handy the Rasberry Pi is said to take to ethernet like a duck to water. I’m far too lazy to haul my monitor to the ethernet plug to test it; WiFi is enough for me.)

That’s all I’ve learned so far. I’ll report more when I whip out the soldering iron and trash it. Good luck and happy nerding.

19 Responses to Raspberry PI: I’m Always One Step Behind The Cool Kids