Posted on April 7, 2015 by Adaptive Curmudgeon

The original puny little 8″ tires have been replaced by 12″ high speed tubeless tires (4.8-8 to 4.8-12). The wheels now have a five bolt lug nut pattern. The center of the hubs has been moved roughly 3″ higher and 2″ further back and 4″ wider than the original OEM position. Instead of welded rigid spindles it has a 750 pound torsion axle suspension.

In use, the ergonomics are at least as good as (or slightly superior to) the OEM setup. The beam to which I have to lift wood is at most 1″ higher than OEM. Close enough that the original tongue support (near the hitch) is high enough. (I’d planned on extending it but it wasn’t necessary.) The wheels are not in the way. 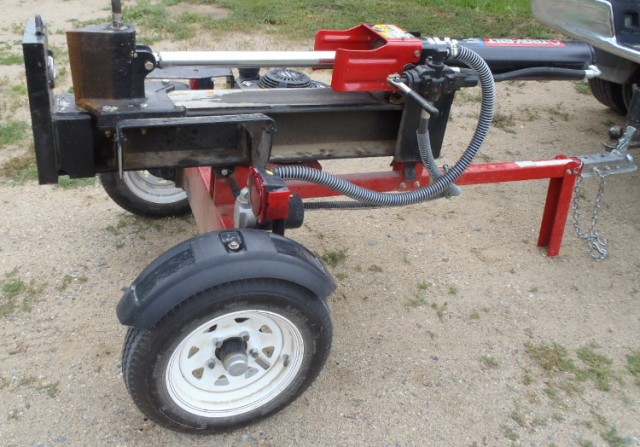 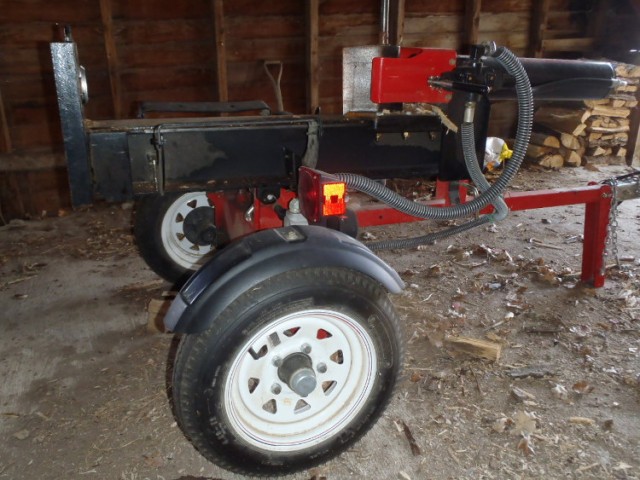 The splitter balances fine in “vertical” mode. I was concerned that the relocated wheels would get in the way but it all worked out well. 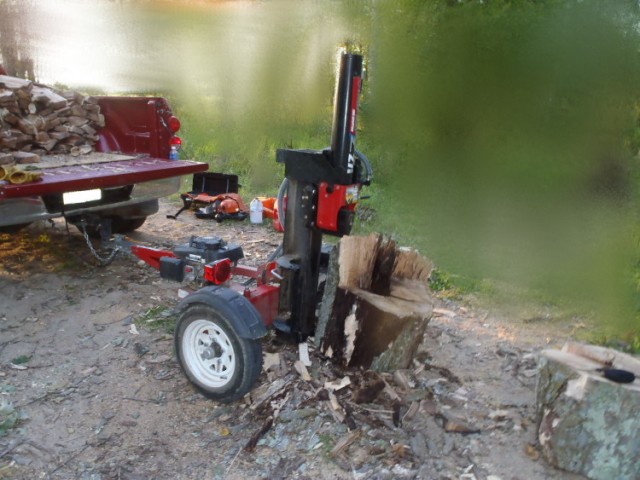 The Foxinator’s turkeys inspected my design and found the new axle adequate.

Torsion axles (if they’re reverse angle) must extend beyond the thing they’re welded to at least far enough to let the suspension flex. This is more or less the minimum for a reverse angle torsion axle. It doesn’t interfere with work at all.  The red lines indicate the added width (despite the crappy photo, it’s the same amount on both sides).

The OEM fenders still fit (I had to replace the one I melted). I’d planned to simply slap on new fenders (they’re cheap) but my welder was inspired by the axle and wanted to fabricate something nice to hold the OEM fenders. The black bracketry you see is his idea and it works great. His solution looks better than my idea and I’m glad I took his suggestion. The OEM fenders flex instead of bending or breaking when I drop wood on them (and I do that fairly often) so they’re much better than rigid metal or plastic. On the other hand Troy Bilt just reams you for them. I scoured the internet and paid something like $35 for one!

I added cheap ($5) trailer lights to the fender supports and they’re simply bolted on. I can replace a light in no time when (not if but when) I accidentally smash one. 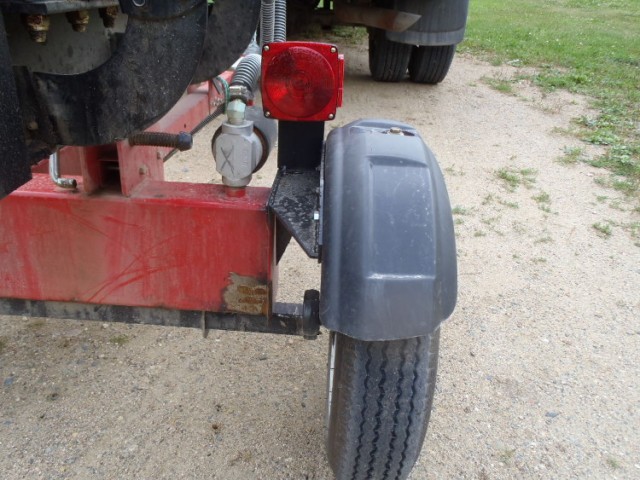 Another view of the nice brackets my welder made; also showing the torsion axle below.

The tongue is hollow square “tubing” stock. I routed the light’s wiring through the frame itself so I’m less likely to rip the wiring out on a stump or something.

It’s has always been impossible to see the splitter behind the truck (it’s too low and too narrow). Thus backing it up has been something of a cluster. I wanted something to see when I was backing up. I tried a magnetic CB antenna with some flagging tied on but it blew over. I went looking for one of those horrific flags that safety Nazis inflicted on bicycles in my youth (like this Bike Safety Flag

My welder stuffed some pipe in the hollow splitting wedge as a “female end”:

And then he welded a big honkin’ chunk of scrap steel bar to the proper sized pipe as a “male end”. It sits in there good and solid when I’m driving and I just set it to the side when I’m working. It’s pretty hefty and you never know when you’ll need a big steel bar. For example I threatened to brain Foxinator’s turkeys if they crap on my gas can again. I planned on hitting it with some orange paint and maybe adding a pirate flag but I never got around to it. It makes backing up immensely easier.

23 Responses to My Woodsplitter Goes to Eleven: Part 13: Success!