My Favorite Machine Betrayed Me

Posted on June 8, 2011 by Adaptive Curmudgeon

What a week! Equipment has been messing with my head. Was there a global declaration that mechanical devices should revolt? I didn’t get the memo. Was it on FOX?

It all started when I set out to cut firewood. 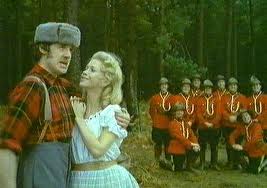 I'm a lumberjack and I'm ok.

You know why people spend millions on fossil fuels to heat their homes? Because it’s worth it! Firewood is self reliant, cheap, and eco-green but cutting, splitting, stacking, hauling, and burning firewood is a metric shitton of hard work.  Only maniacs like me will go for it.

Firewood is such brutal work that it’s an exception to my cheapskate ways. I acquired the best, newest, strongest, ultra-reliable, top of the line, chainsaw and hydraulic wood splitter I could afford. My truck is rusty crap but I invested in the saw and splitter as if I’d die of overwork without them…which is exactly what would happen. Both devices were carefully stored all winter. This was the glorious day I got them out after their hibernation. 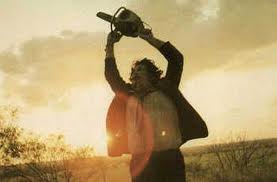 The author testing out his chainsaw.

I started with my chainsaw. Topped off with new gas and outfitted with a freshly sharpened chain it’s a mechanical work of art. It started on the second pull. Music to my Gaia stomping ears!

It's a little known fact that chainsaws benefit from acupuncture treatments.

I’d bucked two cords of largish logs before my arms turned into rubber. When you’re tired it’s better to split than cut. Inattention when running a saw will get you disemboweled.

I happily gave my wood splitter a once over. Situation good; it should fire on the first or second pull. By sunset I was going to put serious dent in the firewood situation! I was elated. Aside from beer and bacon nothing improves your quality of life better than hydraulics.

If you don't have one of these you'll have to flail away with a metal wedge on a stick. Hint: technology unchanged since the Middle Ages sucks.

I pulled the starter cord and…nothing. Huh? Pulled again. Nothing. WTF? I checked the controls but there wasn’t much to do; it has the simplest user interface on the planet; on/off switch, fuel valve, and choke. Pull. Nothing. Pull. Nothing. Damn!

I was crestfallen. A Chevy or a Dodge may let you down but not my shiny new splitter! It’s only a couple of years old; scarcely broken in. Disloyalty from my new machine? A conked out Honda engine!?! Blasphemy!

This was serious! Splitting firewood with a maul takes arms of iron and a head of muscle. Without a wood splitter I’d give up the fight. I’d crawl on my hands and knees to BP and kiss their ass for a handful of BTUs.

I did everything you’re supposed to do. Checked the gas, checked the oil, checked the air filter. Was the muffler plugged? Was the spark plug fouled? Was the on/off switch shorted? Was the fuel valve stuck? I pulled it a thousand times with and without the choke. Nothing.

In abject misery I gave up. The next morning I hitched it up and towed it to town. I was fuming. It was probably one day out of warranty. It’ll probably need a part made of unobtanium that’ll be shipped from Botswana in October of 2012. The hourly shop labor rate will probably cost more than a five star hooker. Sigh…some days you’re the dog but today was a hydrant day.

In the parking lot several guys helped me muscle it into the shop. Each one…all five…checked the gas. (I can’t blame them.) They milled around poking and prodding it. They all agreed it was as new and clean as the one on the showroom floor. Then one guy, an older fellow, sauntered up, flipped the switch to “on”, opened the fuel valve, and pulled the cord. Nothing. I watched him. He manipulated every control exactly as I had. He tried again. Nothing. I sighed. He pulled again. The damn thing roared to life!

I was shocked! Everyone looked at me like I had antennae growing from my skull. Like I was the dumbest, knuckle dragging, ignorant, rube to crawl in from the hinterlands. They all carefully instructed me on the three rudimentary controls…as if I hadn’t fully understood the “on/off” switch.

You mean the switch isn't supposed to point to "off"?

For whatever reason it once again runs like the perfect machine that it is. Maybe it was bored and wanted a field trip. Or possibly karma has decided for some reason that I should look stupid.

I will neither confirm nor deny that I actually exist.
View all posts by Adaptive Curmudgeon →
This entry was posted in Technology of Indignity. Bookmark the permalink.

3 Responses to My Favorite Machine Betrayed Me