Posted on January 23, 2015 by Adaptive Curmudgeon

On the next straightaway the mystery bike rapidly pulled alongside. This was the rider and machine that deigned to ride with the unexciting Ric Ocasek ST1100. I was interested to see what sack of dull would come into view. 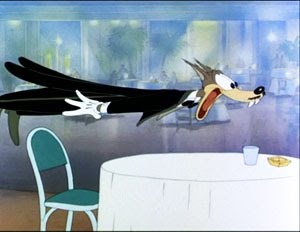 Holy shit! Did you see what just passed me on the road?!?

The motorcycle was a surprise. It was the same make and model as mine but entirely reworked. It was hot rodded and highly modified with a careful eye for style. Unlike the usual generic set of bolt on chrome bits, this was a purely feminine device. Designed, styled, and outfitted from top to bottom as only a woman could choose, it was the most sexualized motorcycle on all God’s green earth. Everything that was not painted was chrome and everything that was painted was hot pink. From stem to stern it had curves and suggestive accents on every surface. Did I detect roses subtly implied in the swirling pink? It reminded me of Georgia O’Keeffe.

I couldn’t focus long because crouched on top, hugging the tank, bent low, and with legs wrapped tight around the engine was a woman. And what a woman!

One glance at her and my IQ dropped 20 points.

She was wearing a tight full body leather riding suit; entirely in hot pink with metal studs along the seams. Rounding out the ensemble were rattlesnake cowboy boots, a pink helmet with blacked out face shield, gloves, the works. There are strippers that dress more subtly.

There’s no reason a woman can’t ride a motorcycle and many do. But this woman wasn’t riding a cruiser, she was astride a custom painted estrogen palace; a two wheeled mechanical erogenous zone. And she wasn’t riding her motorcycle, she was flogging it. The bike, obviously dialed for speed, was wringing massive power from the generic Honda engine. Both our bikes had left the factory as twins but her’s had become a party girl.

The body suit left nothing to the imagination and she had all the right curves in exactly the right places. It took effort to keep my wits about me as she glanced my way; remember we were side by side at 85 MPH coming out of the tail end of a canyon switchback! She nodded once. I nodded back. Then she ripped open the throttle like she had an appointment with the horizon and her bike practically exploded with power.

I was delighted as she passed because the view went from excellent to better. She had breasts like Wonder Woman but her ass was so otherworldly that my poor ratbike’s carburetors gasped for breath. It’s not humanly possible to let an ass like that fade into the distance so I paced her from a hundred yards behind as the road plunged down a steep rock face and all three bikes leaned into the turns like jets.

It must have made a strange procession, had anyone seen it. Three totally unlike objects in rapid succession. A staid and unexciting ST1100 sport tourer a half mile to the front. Totally stock and competently if dully zipping along with all the excitement of a tax return. Followed by a thundering cacophony of feminine sexuality crashing around turns like a lioness in heat. Hungrily gaining ground on every apex and hard charging toward…. toward what? Followed, well at the back, by yours truly; stunned and dusty, churning along with his ratbike and spare gas tank. Looking for all the world like a low rent Mad Max refugee.

I watched that delicious ass top the canyon rim somewhere west of Lizard Head Pass at around 10,000 feet. She caught up with the ST1100 and they were obviously together. That lucky bastard! She paced with the ST1100 while I enjoyed the view from behind. After a few miles we came to a fork in the road, they went one way and I went the other. Eventually my heart stopped palpitating.

After they were gone bewilderment washed over me. The “uncool” motorcycle had disappeared into the sunset with an aggressive neon sex kitten while I’d be rolling out a lonely sleeping bag in the dirt? Some forces in the universe are beyond my understanding.

So, if you’re shopping for a motorcycle, all I can say is that you should definitely look into it. As much as I love my humble ratbike, it doesn’t have the best feature of the ST1100. That feature, the “inexplicably hot woman attractor”, is worth whatever you pay for it. If you think your heart can withstand whatever feminine creature was roaring around on her pink canyon carver, buy one. Buy one now and burn up the switchbacks on the back range of the Rockies. Report back to me if you find her. In fact, don’t bother reporting back, based on her outfit, her riding, and my fevered imagination, you’re going to have your hands full. Good luck.