Posted on January 21, 2015 by Adaptive Curmudgeon

Like anyone who loves his motorcycle I unfairly covet other motorcycles too. I particularly fancied Honda’s entry into the sport tourer category; the ST1100 (now upgraded to the ST1300). Comparing my beloved ratbike cruiser to the ST line was to compare a steam engine to a turbine. The ST1100 had everything right; more luggage capacity but not too much weight, more speed but not a riding position that’ll tire my back, more technology but not hopped up enough to risk unreliability, fairings, windshield, ABS, etc… It was simply a better bike than mine for the purposes I ride a bike.

Yet it lacked something. I couldn’t see myself on one of those fine machines. It was too smooth. Too calculated. Too precise. An ST1100 wouldn’t become a ratbike to match the rat riding it. The shiny fairings would look odd compared to me, unshaved and wearing rumpled unwashed clothes. I’m prone to taking occasional mid-day naps by laying in the dirt beneath a desert juniper. (Check for rattlesnakes first!) I’ve never seen anyone who owns a pricey sport tourer snoozing on the dirt.

I decided that the ST1100, a completely competent machine in all ways, was the Rick Ocasek of the motorcycle world. Absolutely ideal and surely superior to what I rode, but nothing to turn the dial to eleven. I couldn’t upgrade to a Rick Ocasek motorcycle because I can’t be like Ric Ocasek. I was too dusty, or backward, or colorful, or whatever you want to call it. The ST1100 was ideal but I couldn’t embrace it. 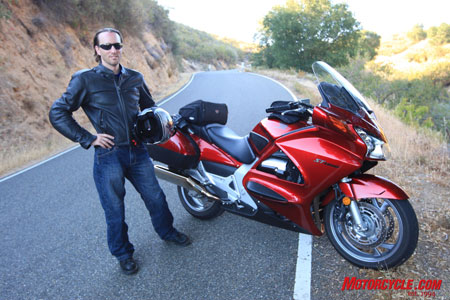 A Honda ST1100 and rider. Neither me nor my bike have ever been that clean and fashionable. Note: Ric Ocasek is not in this photo.

Soon I got to test my theories. Not twenty minutes after my musings that a Honda ST1100 was the uncool yet totally adequate Rick Ocasek of the motorcycle world, one pulled up behind me.

With proper turn signals and polite maneuvering he passed. This was no problem. I’m not some ego plagued git that needs to lead the pack. Conversely I’m not some leather clad poser that can’t get out of his own shadow. At least he wasn’t limping along like a bloated tourer.

We both swooped into a canyon and took a long sweeper of a turn. I got a good view of the ST1100 as its rear suspension compressed. We rolled through as if in formation. The ST1100 held the curve, apex to apex just like my bike. Neither better nor worse. It was the epitome of “average”. I’d half expected him to attack the curve like a “sport bike” and leave me in the dust. Conversely it wasn’t floundering it’s tonnage like a “tourer” either.

Nothing stood out in his outfitting. The rider had a synthetic road suit but nothing as flashy as the outfits favored by BMW sport tourers. (BMWs are the head of the pack in sport tourers.) BMW folks usually gear up in flawless new suits that match the exact wavelength of their bike’s spotless paint job. Their suits cost exactly what you’d expect from BMW brand and they have the brand emblem so you know they paid it. He had matching but not flashy riding boots and a matching but generic full face helmet.

By comparison my outfit was a mess. I looked as hard ridden as the desert. I had faded leather chaps, a synthetic mesh jacket, mismatched fingerless gloves, heavy work boots, and a randomly selected silver colored full face helmet. Such an outfit is sure to embarrass eagle emblazoned Harley riders and flashy race bike pilots alike. Nothing matched anything but it was all well broken in.

The ST1100’s styling was nothing special. It was dark blue, or grey, or some other unremarkable color. Nothing much in terms of chrome and no interesting aftermarket tweaks. It had fairings that were better at shedding wind than my exposed radiator but didn’t aggressively slice the air like a sportbike. His saddlebags might be loaded with a week’s gear or empty. The most average of all was the exhaust note. Not the high pitched fighter pilot whine of a raging sportbike and not the deep longwave rumbling of a cruiser.

Competent and forgettable. I decided an ST1100 was not for me.

Charitably I rolled off the throttle on the next sweeper so the guy wouldn’t have to monitor his rear view mirror for a desert rat who might be gaining on him. I’d made up my mind. There was nothing cool about an ST1100.