Posted on January 19, 2015 by Adaptive Curmudgeon

To begin with I’ll to explain my personal reaction to Ric Ocasek and his rock and roll prowess. Or rather his averageness. 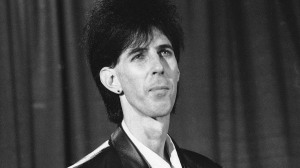 This? This is a rock star? You’re shitting me!

If there ever was a rock and roll band that made no sense it was The Cars. The problem with The Cars is that I like (in a tepid way) their music but it’s as bland as rock music can conceivably get. In any logical universe I’d hate them. Most rock bands have something going on. Either they’re creative (Frank Zappa), musically skilled (Stevie Ray Vaughn), lyrical (Pink Floyd), hard rockin’ (Metallica), or throw a wicked hook (ZZ Top). Without that, a rock band is just future “has beens” and I’ve no time for them.

The Cars are different. They churned out several entirely average generically wholesome arrangements that fit solidly in the mass marketing box that I’d usually call concentrated boredom. Yet I don’t mind The Cars. Drive is an OK song. How do they do it?

The secret is Ric Ocasek. The guy has an entirely nonthreatening voice that, possibly due to a deal with Satan, can overcome every bit of its inherent boredom and make me enjoy the song even though he’s done nothing impressive. When you hear Brian Setzer croon you’ve experienced something. Same for Buck Owens, or Roy Orbison, or Ozzy Osborne, or Jimi Hendix, or even Geddy Lee. Not so for Ric Ocasek. When he sings you hear a sort of pleasant white noise. Time passes for the duration of the song and then it’s done. The mystery is this. Why don’t we feel “ripped off”? We’ve all wasted time listening to various forgettable The Cars hits and then chosen to let Ric Ocasek get away with it. It’s his nerdy super power.

Ric Ocasek is an anomaly I’ll never resolve. He genuinely earns the title “rock star” while retaining the excitement of watching paint dry. Without knowing anything about The Cars other than their music, I presume him to be utterly average. In a world where Ozzy Osbourne is an incoherent shambling mound associated with decapitated bats and Janis Joplin’s haunting voice was snuffed out at 27, there’s something profound about Mr. Ocasek’s unusual ability to be the worlds only boring rocker. He’s a human contradiction, an uncool rock star.

This is the story about Ric Ocasek’s mechanical analogue and the ensuing smokin’ hot babe. Stay tuned.