I’ve written about the 55 MPH speed limit before.  It, like the AMC Gremlin and possible annihilation by Soviet missiles, was an experience.  It made an indelible mark on my psyche.  So much stupidity.  So much misery.  And that’s just the Gremlin!  Frankly you could make an argument in favor of the Gremlin.  It was, after all, better than walking (or death by fire).  Speaking of fire, there’s a point to mutually assured destruction too.  The point being we didn’t do it.  The 55 MPH limit, therefore stands alone.  It was so pointless, so universally ignored, so immensely loathed, so without redeeming qualities… that I can’t fully communicate its inherent pathos.  Ironically, the hate was so complete that there aren’t many references to it.  It’s as if America just wants to forget the whole ugly episode and move on to better things; like going bankrupt on a grand scale.

The lack of references is often the way fate of things that are both everywhere and without logic.  Here’s an example from today; nobody writes operas about TSA gropings.  Why?  Because everyone knows they suck, everyone puts up with it, and nobody but the fully and deliberately obtuse try to pretend that it’s not bullshit.  Who writes about bullshit while you’re swimming in it?

Perhaps someday we’ll get our collective heads out of our asses about the TSA.  If that happens we’ll probably forget about the blue gloved idiot wonders as much as we forgot about Carter’s brilliant innovation in transportation.

Never Yet Melted warmed my heart when they unearthed an old comic from the era: 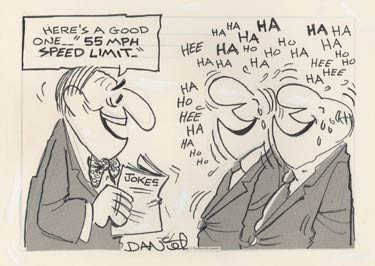 The worst offenses against humanity should be punished by making the guilty drive across the Great Plains at 55 MPH with nothing but an AMC Gremlin and AM radio. Particularly evil offenders should drink Tab while doing it.

Never Yet Melted, like me, recalls 55 MPH as a law that nobody obeyed and compares it to modern fallacies.  Hat tip to them for the image and reference.