Posted on August 3, 2012 by Adaptive Curmudgeon

Given the choice, there are places I’d rather visit than Chicago.  For example, Chernobyl or Marquis De Sade’s basement.  Sadly, I was forced to travel through Chicago; or as I like to call it Modor in the Midwest.

Fortunately I can limit my exposure to Chicago by rocketing through in my big redneck truck.  Aside from an economy based entirely on tollbooths and traffic jams it’s tolerable if I just keep moving.  In fact I’ve made it a game.  I never set foot in Chicago itself and go out of my way to spend as little money as possible (i.e. nothing but tolls) in the entire state.  (One has time to think of such games when they’re crawling along in Chicago traffic.)

The worst part is a feeling that I’m in enemy territory.  The place makes a libertarian’s skin crawl.  I know that gun control and taxes can’t leap up my pantleg and infect me with a zombie like desire to annoy and regulate but I just can’t shake the feeling that it would explain a lot.  Better not to take the chance.

However, this was the week of Chicken Sandwich politics; another example of Chicago’s bullshit.  For those of you who live under a rock (like me!) I’ll summarize below.  (Note, I’m quoting from a random press article just to keep things grounded.  You’ve already probably heard the whole things.  The facts aren’t in play, only the reaction.)

It starts with a guy with a deeply held personal moral code.  Like all Americans he’s free to have whatever opinion he wishes.

“…Chick-fil-A President Dan Cathy, who reaffirmed his belief in the “biblical” definition of marriage during a two separate media interviews in the past month. Cathy told the Baptist Press he was ‘guilty as charged’ of supporting traditional marriage and denouncing gay marriage.”

So Dan Cathy has a moral code and he’s quaint enough to say it aloud.  In the recent past it would be no big deal.  There was a time when folks were encouraged to form moral codes and act accordingly.  (Am I dating myself when I say that?)

Of course this is the modern era when the only approved morality is the one that comports with a certain side of the political spectrum.  Enter a pair of duchebags:

“Chicago Mayor Rahm Emanuel is attempting to block the fast food chain from expanding in his city, saying ‘Chick-fil-A’s values are not Chicago values.’ The chain isn’t welcome in Boston either, according to a letter written by Mayor Thomas M. Menino, in which he pledges to stonewall Chick-fil-A from opening an outlet in the city limits.”

Interesting.  I had no idea that Mayor Rahm Emanuel had the delegated authority to determine the values of all citizens of Chicago.  Does it say that on the city charter?  Or did Rahm just smell his shit so much that he started thinking he was God?  Chicago, despite my loathing for it, is still within the bounds of America so they have a Mayor.  They don’t have a Pontiff, Godhead, or King.  Rohm can look up “Mayor” and then look up “Absolute Monarchical Power Wielded By Divine Right”.  Note; they’re not the same thing.

Rahm isn’t the only guy who has an outsized ego.  Boston Mayor Thomas M. Menino eagerly lined up to be duchebag number two.

I don’t have a horse in the gay marriage race.  What I do have is respect for the limits on a mayor’s power.  I can’t abide a population of ego inflated jackoffs that aspire to be theocratic dunderheads in my nation!  Nobody can legally chase a sandwich shop out of business any more than they can make the sun rise in the west.  We’re a free people.  We are citizens not subjects.  They’re why I avoid places like Chicago.  They can fuck off.

None of this is new.  It’s an attitude that has led me to believe the only thing Chicago creates  are taxes, debt, and corruption.  (And Al Bundy.)  It’s also why I have passed through Chicago dozens of times and I haven’t spent a red cent in their blighted burg.  The better to buy fuel, food, and hotel rooms, in free states farther afield.  But I happened to be passing through on Chick Fill A day.  What a great idea.

Unfortunately the logistics were tough.  My truck is too big for cities.  If you crushed six dozen “green technology” bicycles and dumped three Priuses on top you’d have the mass of my truck’s hood.  Piloting my behemoth down those streets was challenging enough that I came, I saw, and I left…as soon as possible. 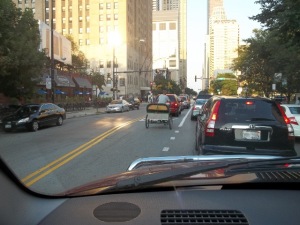 A bicycle rickshaw? Seriously?!? I find this mildly amusing and a bit pathetic. Has Chicago regulated itself out of the industrial age? What’s next; mules?

Ground zero in the movement for freedom of chicken sandwiches.

The press was there. What’s that van blocking the way?

No kidding? A police van? Move along. Nothing to see here.

Actually things weren’t that exciting.  The place seemed to have about twice the customers of adjacent shops.  I don’t know what the press was reporting but it seemed like happy people eating sandwiches in a humorous “screw you” to political blowhards.  I’d been hoping to buy a t-shirt hawked by an enterprising street vendor but none were around.  Just some T.V. guy setting up a camera and a crowded store.  Pretty tame really.

I left quickly.  More out of concern for my truck (which desperately wanted to be in a more suitable habitat) and busy schedules than anything else.

A block later I passed this:

Look what was parked a half block away. Nothing to see here either. Keep moving.

There might have also been a third vehicle but I wasn’t fast enough with the camera.  As far as I can tell the were a number of police eagerly waiting for something to happen but nothing was happening and (to their credit) they weren’t starting trouble.  Even the T.V. folks were pretty tame.

On the way out to the highway and roads leading to freer locales I took one last photo:

This young lady had an epic derrier. All you get is a picture of a tree. Sucks to be you.