The Car We Were Forced To Build

Posted on March 26, 2012 by Adaptive Curmudgeon

A reader send me a link to the Volt’s commercial.  Watch it and you’ll be embarrassed to be in the same room with that level of saccharine bullshit.

It makes me cringe.  It’s dour propaganda from behind the iron curtain in 1978.  The ad appeals to our patriotic duty to buy it and imposes guilt and obligation.  It implies we must buy a Volt or poor people in a little town in Michigan won’t have jobs.  As if you might make little Timmy starve in his crib if you happen to buy a Ford Focus.  It’s drab and uninspiring.

You never actually see a Volt move under it’s own power.  You scarcely see one fully assembled.  You don’t see it scooting down an actual road.  You never see a smiling driver at the wheel.  God forbid someone buy a Volt because they want one.  There is nothing there to indicate anyone anywhere would simply drive it as a choice and not a duty.  There are no squealing tires, no beautiful back lit close shots of the car, no sweeping vistas with a road heading for the horizon, no snappy theme.

They don’t mention notable awesome features; good grief it’s the only electric car on planet earth and they don’t mention that it’s electric?  What about a smirking driver cruising past the suddenly unnecessary gas station?  What about zipping your electric car past some schlub standing in the rain pumping gas?  What about sexy women (or men) who want you because of your car?  What about humor?  Just guilt and malaise.  It’s an ad to send food to starving Ethiopians with Ethiopia scratched out and Michigan pasted in.

The tagline is that “it’s the car that America had to build”.  Oh dear God…it’s a car that allows me to never ever buy gasoline again and they can’t even sell that?  Just “we had to build it”?  Because what, because the Kremlin ordered it?

You have to build this car. You have no option!

I submit that even things you must do for the sake of the country needn’t be dour unpleasant tasks.  Check this out: 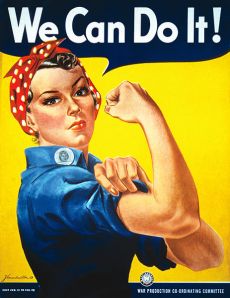 There will be no whining while Rosie the Riveter is watching. Muscle up and kick the Axis Powers until they're weeping in the gutter.

That’s right.  Rosie here is not worried about jobs…she’s got one.  Toughing up to kick ass.  Go Rosie! 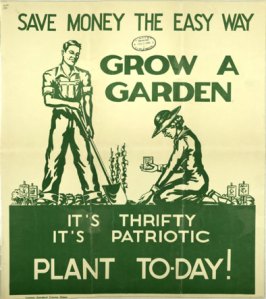 You want food? Pick up a damn shovel and make it.

And for turning the dial to eleven I refer to this…an older one from World War I: 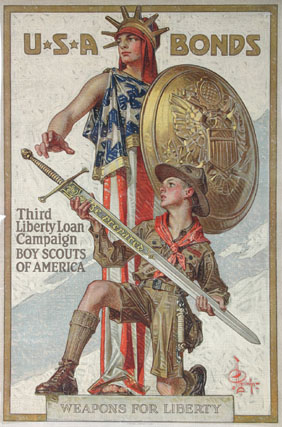 The Boy Scouts have provided this Godlike person all the weaponry needed to DOMINATE. (Also check out the writing on the sword.)

What I’m saying here is not that it’s bitchin’ cool to rivet bombers, grow turnips, and buy questionable bonds…what I’m saying is that if you want to appeal to me to make a sacrifice you’re not going to do it with puppy dog eyes and weeping about union welders in Hamtrack Michigan.  Tell me that I can be awesome.  Tell me I should be awesome.  Then get the hell out of the way.

We’re Americans, up until recently we had balls of steel and everyone knew it.  We had a whole society built around the ideal of adapting, growing, and prospering.  Buying a lame-ass car because it’ll employ someone is an eastern European ideal.  The Russians had the Lada…we did not and we build Cadillacs and huge trucks.  Because that’s what we wanted and we had the cash to buy it.  Americans looked at cars and thought “I want more horsepower”; every single year for a century.  We know there is nothing noble about driving shit.

Americans shouldn’t be buying anything just to make a fake job…that’s not our game.

Talk of a car as if it were an obligation is un-American.  Cars are wings and freedom and sex and machinery and excitement all rolled into a device that just happens to get you to work in the morning.  Cars you endure come from the Soviets.  Americans don’t endure…we overcome.

Note too that we are programmed to overcome through sheer awesomeness.  Moping around is for losers.  Rosie the Riveter wasn’t whining about her boyfriend on the Western Front; she was building bombs to send up the Furher’s ass so he could get home and they could get busy creating the Baby Boom.  The farmer wasn’t grousing about tilling the backyard; he was going to feed the family even Europe was trench warfare from horizon to horizon.  And last but not least, I don’t know precisely who or what entity that Scout has equipped but you’re looking at something one unleashes upon our enemies…not a diplomat bound for negotiations.

Where is that energy in the Volt commercial?

Done right I’d buy one myself.  I’d paint “Fuck Middle East Oil” in on the hood, crank the stereo with death metal, use it as a whole house battery backup, and tinker with slinging that dead weigh battery so low that it’ll hold corners like a guided missile.   Innovation can be fun!

The gutless Frankenstein’s monster that is Government Motors took everything edgy and exciting about a new idea and made it into a jobs program.  It’s Jimmy Carter’s sweater.  It’s a poodle in a nation that likes sharks.  The Volt is the 1970’s resurrected from it’s grave.

Americans will rise to a challenge or embark on an adventure.  But they’ll reject enduring “the car we had to make”.

19 Responses to The Car We Were Forced To Build