Posted on February 6, 2012 by Adaptive Curmudgeon

Suppose you must have a high mileage vehicle.  Maybe you’re cheap (efficiency is a virtue) or maybe you’re dedicated to reducing your carbon footprint or some other green kool-aid.  I don’t care.  All I want to do is save you from the hollow death of a boring vehicle.

High MPG does not mean gutless and uninspired.

You might think you want the ultimate high mileage vehicle…the Chevy Volt.  Forgetting that the Volt is powered by coal fired electricity it suffers from something else.  A fatal lack of cool.  Here is an identical priced alternative to the Volt with high MPG and…unlike the Volt…balls! 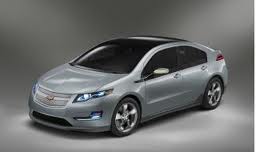 The $40,000 Volt. Photo taken in a showroom because none have been actually driven. If you drive this vehicle, even nerds will beat you up.

The $40,000 Morgan. If you drive this vehicle you'll have a permanent grin. It can rock your socks like a rocket sled on steroids. Jay Leno (who's driving it) is NOT in a studio because this is a machine meant to be driven...not a spreadsheet entry. (Image linked.)

The Morgan cost about the same as the Volt.  It gets 50 MPG.  It goes 0 to 60 in 4.5 seconds.  It sounds like a raging bull.  Women will want you and men will want to be you.  If you ever meet a Volt you’ll blow it’s doors off and be halfway around the world before the Volt has left the parking lot.

I’ve been reading about them for a while.  Here’s what a review had to say:

“…[it] gets its steam up with a noticeably Harley-like bellow from its pair of straight-pipe exhausts.”

“…feel vividly the robust crankshaft doing its business, the Harley-style driveline unit directly beneath our buns making sure that the power and torque reach the rear Vredestein tire without shredding it like confetti.”

Oh God yes!  Has anybody said something that sexual about a Volt?  But wait there’s more.

“There’s a fantastic noise from the V-twin that happens upwards of 3,500 rpm. Below that threshold, the sound and rumble come mostly from beneath in the exhaust pipes and driveline. But north of there, the two fat, fuel-injected cylinders out front start to sing an octave or so higher. Between the fresh wind raking past our head and that visceral racket happening from both up front and out back, the soup of sensations is really intoxicating, yet it’s also enough for us to realize that a good pair of goggles would be a perfect piece of kit. We know we need to back off sooner than we’d like, if only to keep our retinas from separating, but that practical decision to do so is delayed for as long as possible. There will be no 125-mph top speed runs today, however.”

And then it cuts to a video just so you can hear the delicious exhaust note as it’s fired up and nonchalantly peels out.  It looks fast just sitting there, sounds awesome at idle, and that’s not even considering what other dimensions of joy you’d feel with the hammer down!   It makes an electric clone of a Ford Fusion seem as exciting as a lobotomy by comparison.

“The thing, for all of its admitted quirks, is a pavement-grappling road rocket.”

Remember…50 MPG and same price…but you’ve got a goddamn rocket!

If you can’t shift, you’re too pathetic to own this!

“…there is no anti-lock supervision, electronic brakeforce distribution, nor any other assistance on offer.”

So it’s not as good as the computer assisted control everything with a chip Detroit product?

Even better is that it’s being produced for profit.  They pre-sold 500 of them (July 2011) and will be marketing in the US in 2012.  The Volt needs a tax subsidy to drag a few out the door and this thing is causing the Morgan company to scramble to gear up to make more to keep up with demand.

Remember this is about the same price as the Volt and gets 50 MPG.  High MPG does not mean boring.  Listen to me folks.  Don’t drive shit just because gas is expensive!