The Other Half Of The Misery Index

Posted on December 12, 2011 by Adaptive Curmudgeon

Recently I ranted about inflation. I’m pissed that I saw inflation coming a mile away and was told I wasn’t seeing it. I was told “this time is different” and “mathematics don’t apply to us” and “don’t be lame, it’s a historic moment“.  Now inflation is swirling around my ankles and I’m being told that it’s not true. Why? There is no nobility in denying that which is true.  I’m annoyed because some dumbass will be telling me it’s all sunshine and rainbows right until I’m dropping a twenty on a box of corn flakes.  (Especially if the media likes the guy in the big chair.)

I might as well add the other part of the misery index; unemployment. I’m less worried about unemployment than inflation. Inflation sneaks though the window in the middle of the night, sets your car on fire, shoots your dog, and lobs a live grenade into your bank account. Unemployment shows up drunk, drinks all your beer, craps on the couch, and makes a pass at your girl but you can try to set things back in order once you shoo it out the door.  Unemployment is never delightful but an individual can do his or her best to adapt and might come out ok.

Also, unemployment is hard to pin down. It’s based on the number of Americans who’re receiving a certain Federal benefit. The relationship between this and hard working COGs who are temporarily idled is fuzzy.  But accepting that it’s a fruity number it’s still relevant.

So how are things going? Shitty!  How do I know they’re shitty? Because the statistic stands at 8.6%.  Not long ago Bush Jr. was in office and eight points would have been considered the end of life as we know it and proof positive that we were doomed.  Bush’s unemployment rate bounced from 4.3% to 7.8%.  Towards the end of his administration he was hounded for unemployment any time the media wasn’t barking about Guantanamo.  (Good thing Obama closed Guantanamo.)

So 8.6% is bad news right? Nope, the press loves the guy in the big chair so it’s all puppies and flowers. Check it out: Jobless Rate Dips to Lowest Level in More than Two Years.  I’m really impressed by their ability to spin 8.6% into good news.  (Next they’ll kick me in the groin and tell me it’s good for my self esteem.)

I couldn’t help but dredge up this chart: 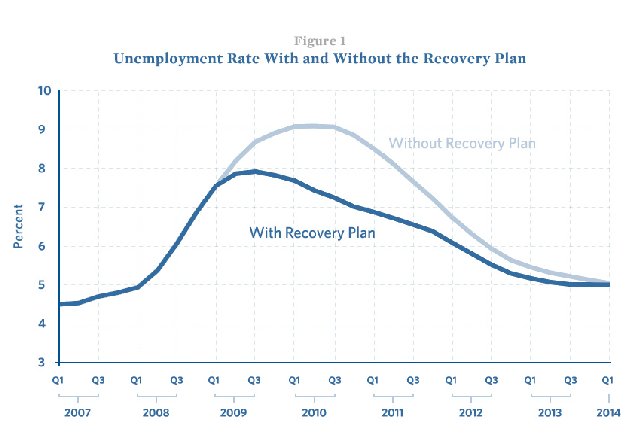 This is the chart that the president showed so it must be right. Also, I think entirely in pastels.

This chart comes from page four of a January 2009 report by the Council of Economic Advisors called “The Job Impact Of The American Recovery And Reinvestment Program” (it’s available from the footnotes in Wikipedia). This chart was a key to the sales pitch (snow job) that got the “Stimulus Package” passed.

This chart is also completely fucking wrong.  Not one part of their “predictions” were even remotely correct.  (Which is something I saw coming…as did many others who hadn’t drank the Kool aid.)

The next chart is reality: 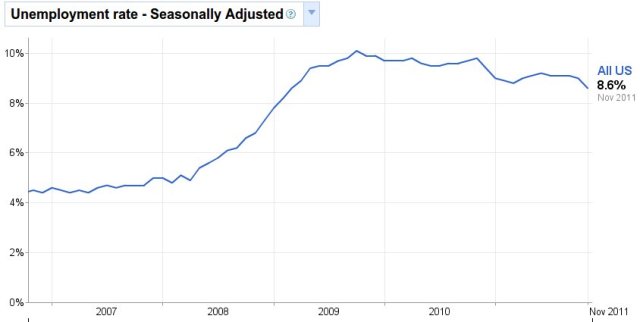 Reality is a harsh mistress.

I decided to compare the puppies and rainbows “prediction” (i.e. bullshit) with real life.  Check out my super cool annotation abilities! 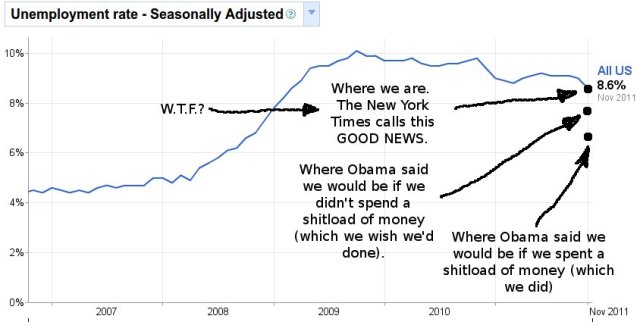 Since when is "much worse than predicted under any scenario" good news? (Bonus question: to what extent is this related to the stock price of New York Times?

Just for fun I pulled the stock price for the New York Times Co. during the same time period as “predicted” under the Stimulus Package.

Yes those are dollars and yes their price has dropped from about $28 to $7.62 right now. Well played gentlemen!

4 Responses to The Other Half Of The Misery Index