Hat Tip To The Pro

Posted on December 1, 2011 by Adaptive Curmudgeon

I installed a home appliance to make my life better.  As I should have expected, it has pissed me off for months on end.  (Note to self: Find an appliance salesman and punch him in the balls…karma requires it.)

It was billed as a dishwasher but I believe it was a test of your home’s plumbing cleverly disguised as a useful appliance.  My home failed this test.  The house came with a dishwasher that didn’t work.  I thought I’d just hook the new dishwasher to the old fittings.  WRONG!  It turns out that the plumbing in my house was a craptacular mess.

The Neanderthals who formerly owned my house had virtually no pride of workmanship but a shitload of spare time.

Rather than a standard sewer hookup they’d jammed a 1/2″ flexible hose into a hacksawed 2″ sewer line.  How did they fill the remaining 1 1/2″ gap?  With silicone.  As near as I can tell Jethro Dipshit in the days of yore jammed most of a tube of silicone into the hole and made a softball sized mess.  If I ever have a time machine I’m going to find that loser and beat him with a plumbing manual.

As for the water-in they’d done something similar.  Two random fittings and a tube of silicone.  Did I mention that the old dishwasher was broke?  I think it committed suicide after witnessing criminally incompetent pluming.

I put in several hours installing a proper sewage line, in line, and power hookup.  I built everything up to code and with the standard fittings.  Then shoved the dishwasher into the appropriate spot, hooked up the fittings.  (Which had matching threads as they should.)  Pridefully turned it on…

So I checked every fitting.  It leaked again.  I tried my favorite approach; swearing.  When that didn’t work I re-tightened everything.  It didn’t leak.  Yeah!

It worked for a while.  Then it leaked again.  In frustration I installed a ball valve on the input line, so I could take the dishwasher off-line easily.  Then I rechecked every fitting.  I tried everything: Teflon tape, silicone (in moderation), more swearing.  Finally I got it sealed up.

It worked for a while.  Then it leaked again.

I finally gave up and called a plumber.  He arrived two weeks after the call.  (Man I love having ball valves on various water lines!)

I was shattered.  What kind of man hires a plumber for a dishwasher? I suck!  I expected him to take a standard fitting, use it to hook my standard input line to the standard dishwasher, and do it all in five minutes.  I’d get a huge bill for five minutes work; and I’d justly deserve it.

He expected the same thing.  Instead he announced that my dishwasher was apparently made in bizzaro land and had an unusual fitting.  He tightened it just like I’d done and it leaked just like it always does.  He’s a Godly man so I swore on his behalf.  (I’m thoughtful that way.)

After quite a bit of noodling around he discovered that the brass fitting that came with the dishwasher had a hairline crack.  (I hammered it a bit to make it show in the photo.) 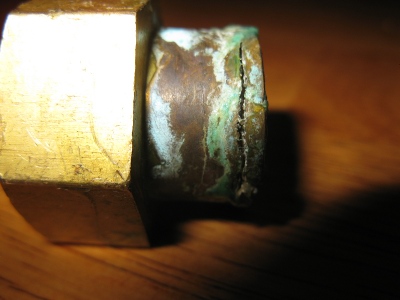 When mankind cannot manage brass threads...we're slowly devolving to losers in mud huts. I'm of the opinion we're well on that path.

I was elated.  A problem identified is on it’s way to a problem solved.  Just replace the brass fitting.  Right?  He tore though his pile of brass bits and announced that none of the 345,834,221 pieces in his truck fit my dishwasher.  So we piled in my car and raced to the hardware store (which was about to close).  They didn’t have it either.

He suggested I contact the manufacturer of my bizzaro dishwasher.  I suggest he load a pistol and shoot me.  We both agreed that my dishwasher must have been made by illegal aliens in Guam on who speak Mongolian, answer the phone (which is unlisted) only on alternate Thursdays, and probably set fire to the tool and die that made my dishwasher the day the last one rolled off the assembly line.  In short the odds of getting the fitting from the supplier was lower than finding an honest politician.

I suggested we stop off at the bar en route back to my house…and leave me there.  He got motivated and attacked the hardware department.  Several unusual objects appeared on the counter.  I bought them all.

Back at my house he soldered some copper together and added some glued together bits of CPVC and installed it.  The next day (let the fittings cure) I opened the ball valve and it worked like a charm.  If I ever have another child I’m naming it after my plumber.

Also, and this is because I want to protect future generations, when this dishwasher finally wears out and I buy a new one (theoretically with “normal” fittings) I’m going to remove the adapter we had to create and bury it in the forest.  I refuse to leave behind anything like the works of the silicone people.

I will neither confirm nor deny that I actually exist.
View all posts by Adaptive Curmudgeon →
This entry was posted in Garagineering, Homesteading. Bookmark the permalink.

6 Responses to Hat Tip To The Pro