My Vision Of An Excellent User Interface

Posted on November 17, 2011 by Adaptive Curmudgeon

We’ve all had dreams where we imagine we’re doing work tasks.  Doesn’t that suck?  All night long your subconscious pretends you’re working like a dog.  Then you get up and do it for real.  Ugh…

That happened to me last night.  I dreamed I was making elaborate calculations on subsets of a database.  Then merging subsets and looking at pooled statistical properties.  Good grief.

But there was a twist.  I wasn’t dreaming about sitting on my ass in front of a beige box.  Instead I was somehow making calculations with a blacksmith’s forge. 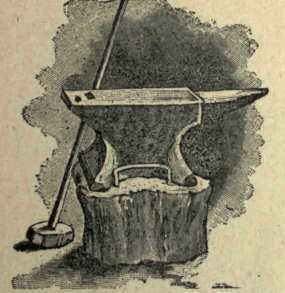 This is good user interface. I want one.

I had a pavilion with bellows and a nice coal fire.  It was snowing outside but comfortably toasty near the fire.  I’d take a database (which my subconscious conveniently chose to take the form of bars of iron) and heat it up in the flames.  I’d grab it with tongs and hammer the sucker into submission on a big honkin’ anvil.  Then I’d plunge it into water and somehow just know the answer.    “Ah ha!  The standard error is sixty three units!”

I’d think something like; “I wonder what a merge of the other dataset would do to the pooled sample?”  Immediately I’d see a bar of some other metal like copper.  Into the flame it would go.  Then I’d bludgeon the two metals with the hammer.  Wham wham wham.  Fold it a couple of times.  Dump it into the water.  And I’d know the answer.  “Excellent!  The variance seems much more predictable now.”

At some point I was half aware this was a dream.  Not a difficult deduction given that I was hammering iron and copper and zinc and somehow that was turning up as non-linear regression.  But it was working!

And it was fun.

When the alarm went off I still had the memory fixed in my mind.  It worked damnit!  But by the first cup of coffee reality had set in.  You can make horseshoes with an anvil but not an ANOVA table.  Shit!

Just for the record if anyone makes an interface like that.  (Steve Jobs’ successor perhaps?)  Sign me up!

4 Responses to My Vision Of An Excellent User Interface