Posted on January 17, 2011 by Adaptive Curmudgeon

My commute is pretty easy. I carefully compromised between the rural location I want and the commute that I’m forced to accept. (If it weren’t for daily commuting I’d live farther from civilization…possibly Death Valley or Pitcairn Island.) 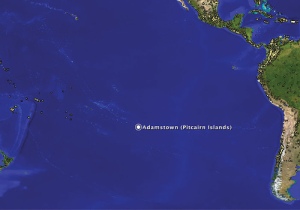 A home should be located as far as possible from nosy neighbors.

My morning commute is on the perfect road.

Envy me! Being accustomed to mountain passes and canyons where cliffs and rocks and switchbacks and dragons and volcanoes make driving a lot more exciting, this road fascinates me with it’s simplicity. I sputter down either of two huge lanes between shoulders upon which you could land a Cessna. If, for some reason, I can’t keep the car on pavement there is a big fat, mowed, grassy, gently sloping, median.

Nothing is perfect and whenever there is a blizzard I pass a morning crop of wrecked cars. Sometimes I see the accidents as they occur. Always impressive! They tend to follow a pattern; the vehicle (which is by definition going too fast) hits a slippery patch. It gradually drifts off the pavement and/or begins spinning like a politician covering his ass. Then it charges over the ditch (if there is one) and careens into the deep snow.

Those of you who dwell in southern climates cannot know the joy of winter driving.

It’s terrifying but I can’t imagine anything better for a soft landing than a mowed grassy “lawn”. It’s the vehicular equivalent of smashing into a pillow.

Local residents demonstrate snow conditions. According to the authorities it's better to hit steel than brutally soft snow.

There are exceptions but usually the aftermath isn’t too bad. Sometimes the car takes damage from it’s adventure…crumple zones do what they’re engineered to do and the repair bill goes astronomical. Fortunately, (quite often in fact) the event mandates nothing more than a tow truck to drag the vehicle out of the snow and a new pair of underwear for the driver. What luck! Nobody’s hurt and the damage is minimal. Count your blessings.

Unfortunately in 2008 there was a hiccup in the economy and politicians everywhere went apeshit. The Obama squatted over our country and shat a big steaming heap of debt. Some of this wretched excess went into shovel ready “improvements” to my boring, irrelevant, lightly used road. A gobsmackingly large pile of money evaporated as a couple guys spent the summer installing several miles of guardrail. (Apparently this was supposed to create jobs. How’s that working out for us?)

It's a little known fact that guardrails were inspired by World War II tank traps.

This is the epitome of top down decision making. On some roads a guardrail might prevent a long theatrical plunge followed by a funeral. So they “upgraded” on my flat simple road?

The justification was that guardrails were needed to separate the two directions of travel. In my opinion, several hundred feet of sloped grass between them is plenty. Yes, conceivably someone could thunder off one side, careen down the wide sloping median, fly across the depression in the middle, rocket up the wide slope on the other side, and then, with whatever momentum is left, manage to hit someone. Such collisions are rare because a crashing vehicle needs to be moving like greased lightning just to get across the median. It can only occur when there’s no snow and even summertime wrecks usually grind to a halt in the soft turf. Cross-lane accidents are tragic but you can’t protect against everything and relatively speaking this section of road was very safe.

Aside from the wasted money I’m not opposed to safety. However, I was livid because they made minor fender benders into much worse events just to protect against very rare and largely theoretical accidents. What formerly would be an undamaged car lodged six feet into a snow drift is now a totaled heap impaled on a guardrail. I don’t know what it might do to drivers but I do know that it mangles vehicles. In order to minimally reduce a theoretical and rare event they created an expensive sure thing that happens a lot. 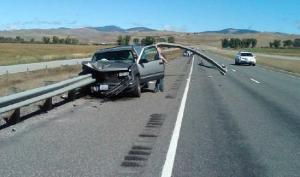 Good thing there was a guardrail! Otherwise things might have been dangerous.

My theory that smacking into snow is better than whalloping a steel shaft hammered into the ground never seemed to impress anyone. Today, on my morning commute, I saw events carried out exactly as I predicted. A generic sedan slid off the road in a generic accident. The car was entirely undamaged. Once it gets yanked out of the snow it probably can be driven home. The paint wasn’t even scratched. Except the rear quarter panel, rear bumper, trunk, and rear door which all hit the guardrail. Those sectors looked like they’d been trampled by a herd of Wildebeast. It was pointless. That car wouldn’t have made it to the other lane if I’d pushed it with a bulldozer so a cross lane accident wasn’t in the cards. Obama’s stimulus guardrail did nothing but damage some poor schmuck’s sedan.

I should staple a picture of that damaged car to the forehead of the next guy with a “shovel ready” idea and unearned money ripe for disposal. Just for the record, if anyone wants to benefit humanity by improving a road…stay the hell away from me.

I will neither confirm nor deny that I actually exist.
View all posts by Adaptive Curmudgeon →
This entry was posted in Harangue-a-bang-bang!, Word For The Day. Bookmark the permalink.

2 Responses to My Commute Got “Stimulused”