Posted on November 15, 2010 by Adaptive Curmudgeon

I went to the woods because I wished to live deliberately, to front only the essential facts of life, and see if I could not learn what it had to teach, and not, when I came to die, discover that I had not lived.

Once, when I was young and impressionable, I read those words.  Thoreau, that turnip eating proto-hippie, poisoned my mind with them.  I read them like they were antidote to a undefined disease and I never was the same again.  He’s one of many authors who’ve put a great deal of effort into making you perceive life at a deeper level than the glittery plastic horseshit sold at the mall.  The damnable lot of them will make you pine for unspoiled vistas and rocky crags amid a society bent on sticking us in front of computers perched in fabric boxes.

Don't ever take advice from men with sideburns.

Thoreau got off on poetic beauty.  Even though he got the ball rolling I’ve always been more of a meat and potatoes anti-idealist.  I can’t get behind any philosophy that doesn’t condone beer and profanity or might disrespect my motorcycle.  Nor am I about to sit in a cabin and pen missives about sitting on a pumpkin.  My gig is self reliance and freedom.  In moderation.

Moderation is key.  Unlike Thoreau or any of a number of wild eyed Utopians, I have a day job.  I pay taxes, grouse at traffic, get junk mail, and complain about the neighbors.  Thoreau was a hermitage of one.  I’m neither that dedicated nor that inflexible.

This causes a balancing act.  Sometimes I balance well.  Other times I go ass over teakettle in a comedy of errors.  Recently I was convinced I’d gone down in flames only to realize I’d done ok.  Case in point; winter heat.

I live where winters are chilly.  Actually it’s so damned cold that it passes “chilly” on the way down and doesn’t return to that level until you’ve lost hope.  I like it.  Everyone in such a climate has a furnace of some sort.  They pay cash, check, or credit for the energy to heat their home and it ‘aint cheap.  Propane deliveries, natural gas pipelines, big ass power grids, whatever…energy makes heat and energy is purchased in units of little green slips of paper called dollars.  Thoreau, if he were alive, would huddle around a smoldering pinecone and write a poem about his iced up solar panel.  For years, I just cut a check like everyone else and bitched about prices like everyone else.

Eventually I walked the walk and got a woodstove. I like wood stoves.  One doesn’t bask in the glow of an LP furnace with the satisfaction provided by the smallest wood fire.

A fellow with a chainsaw and manly attitude can stack enough wood to keep the house toasty warm.  Provided he works like a dog.  So I set forth this spring amassing firewood and made decent progress.  I was pleased.  Alas, I’ve got that darned day job and wound up shipped to and fro.  I don’t care what level of a bad ass survivalist nutcase you are, no human can stack a cord of firewood and still make the flight to Phoenix the same day.  Some days you’re the dog and some days you’re the hydrant and the boss calls the shots.  Cue the balancing act. 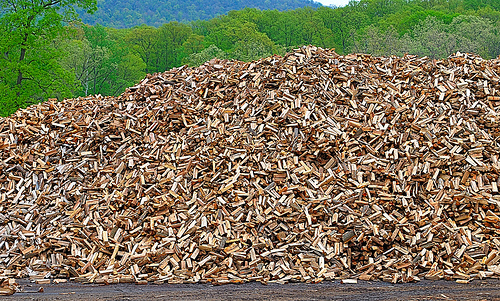 In cold climates it is wise to amass a considerable stockpile of wood to assure sufficient winter heat.

Now it’s some months later and the tinge of winter is in the air.  The die is cast.  I have a little less firewood than I think we’ll need.  Amish families, more experienced homesteaders, and backwoods bubbas all around me are surrounded by mountainous heaps of firewood and my little stack seems weak and inadequate by comparison.  My rough guess is I’ve got 80-90% of what I’ll need to make an “average” winter.  I feel like I failed. 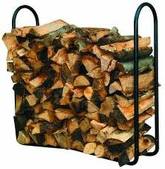 Then, as I was drowning my concern with a couple of good microbrews I had an epiphany.  Not a deep one mind you, but one good enough to make the pricey beer worthwhile.  I have a lot less wood than I wanted but I have a hell of a lot more than none.  If, and this will be determined by the weather, I run out of firewood…I’ll buy fuel for my furnace just like the other 99% of the population have been doing all damned winter.  Nor will I need to buy a whole winter’s worth; just enough to cover the last few weeks of bluster.  My woodpile, incomplete as it is, represents an asset.  How many working stiffs cruise into winter with cash stockpiled to pay for the whole winter’s heat?  I know that one from experience…the answer is none.  So I figure I’m 80-90% ahead of the game if I compare myself to Bob in Marketing instead of Grizzly Adams.

Why am I writing this?  Probably I’m just a narcissistic asshole who’s drinking beer and looking at a woodpile.  But I’m also trying to toss a life preserver out there for those folks who are leaning toward self reliance but are stymied by the killer investment in time and dedication.  You can’t go from zero to hydroponic tomatoes in January in one shot.  There’s a lot of give and take along the way.  Don’t let some trust funder on the cover of Mother Earth News dissuade you.  Do what you can and don’t fret if you don’t quite go all the way.  Self-reliance is as much incremental gains as the big breakthrough folks imagine and it’s not so much as something you attain as it’s something you aspire to.

Well that’s enough cogitation.  You may all go back to surfing now.  Thanks for listening.

I will neither confirm nor deny that I actually exist.
View all posts by Adaptive Curmudgeon →
This entry was posted in Libertarian Outpost. Bookmark the permalink.